My job is fantastic. 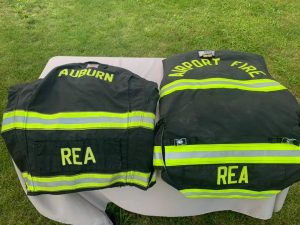 I’m surrounded by beautiful jewelry and I often get to help people choose precious items to mark milestones. This is fun on a regular day, but it’s even better when I get to help friends. Here’s one of my recent experiences.

I know Aaron from Auburn City Fire Department. I was a firefighter with the department back in the nineties, and by the time Aaron came on I was still associated with the Hook & Ladder Company and we worked together on some fundraisers. Since then, Aaron has moved on to work for Sacramento International Airport’s fire department. He contacted me last August because he wanted to propose to his girlfriend, Shelby and he wanted to custom create the ring of her dreams. Let me pause here to explain that I also know Shelby, as she is currently an engineer for Auburn City Fire Department. Our paths have crossed over the years, for fire department fundraisers and celebrations as well. She is not only a good firefighter, but she is a very sweet and nice human. When Aaron contacted me to create Shelby’s ring I was excited to be able to help two people who I enjoy and admire. 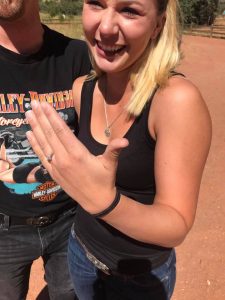 Aaron explained what Shelby was hoping for: a princess cut diamond, set at an angle, in white gold, with inlaid turquoise in the custom made wedding bands, that would cradle the diamond in the center. We shared images, sketches, quotes, color samples and diamond grades almost all through text and email. Aaron even gave me a “code name” in his phone so we could communicate and keep the surprise for Shelby. We created the engagement ring in house at Roper’s and we worked with a company named Kabana, out of New Mexico, for the inlaid turquoise bands. They created them to fit perfectly with the engagement ring we had set. 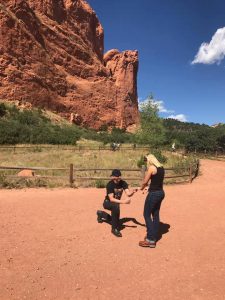 Aaron & Shelby went on a motorcycle trip where he proposed, much to her surprise. I got to see the pictures through Facebook and had tears in my own eyes when I saw the tears in Shelby’s.

As their wedding date approached, Shelby contacted me to create a special ring for Aaron. This was at the height of our shelter in place for Covid19. She and I texted and emailed and found the perfect ring for Aaron. As motorcycles are an important part of their life together, she provided me with a picture of the pattern from Aaron’s motorcycle tire. I worked with another (made in America) company called Lashbrook, and they were able to create a custom ring for Aaron with his own tire pattern. 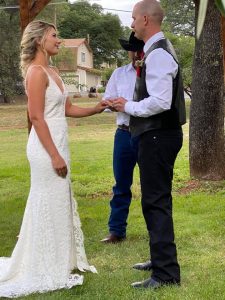 Their wedding was scheduled to take place in early June, and as we all know, fresh from our shelter in place orders, weddings that did take place at this time were very different than their original plans. Aaron & Shelby had a much smaller event than they had originally planned, but it was filled with special moments. My favorite was the moment when they approached their turnouts and Shelby removed her maiden name (Davis) and replaced it with her new married name (Rea). This part of their ceremony was particular to them and so fitting for who they are. 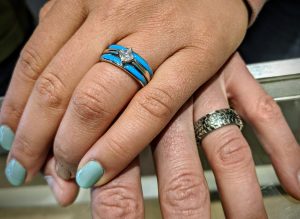 Before Shelby & Aaron left for their honeymoon, they stopped by Roper’s. I got to see their rings, together on their hands. I got to congratulate them in person and wish them well. Working with both of them was special on so many levels. They went out of their way to work with a local, Auburn business. They invited me to be a little part of their story, and I enjoyed every step of the way.

Shelby & Aaron, from all of us at Roper’s Jewelers, we wish you a lifetime of love and happiness!