Those two words conjure images in most of our minds. We think of our own rings, or perhaps those of our parents or grandparents. We know the stories of our own rings, but did you ever stop to think about the story of the wedding ring? We have…

As far back as 900BC the Egyptians exchanged rings woven of reeds or grasses. These materials wore out easily, and might be replaced with those made of leather or bone. (A handmade declaration of love).
In the 2nd Century BC, According to Pliny the Elder, the groom gives the bride first a gold ring to wear during the ceremony and at special events, then an iron ring to wear at home, signifying her binding legal agreement to his ownership of her. (A legally binding agreement is not as romantic as two months salary…)

During the 1st Century BC: Puzzle rings first appear in Asia, where sultans and sheiks use them to tag each of their wives. (Not so much proving their love as staking their claim…)
In 1477 saw one of the first recorded uses of a diamond engagement ring, Archduke Maximilian of Austria proposes to Mary of Burgundy with a ring that is set with thin, flat pieces of diamonds in the shape of an “M.” (Finally a little romance…) 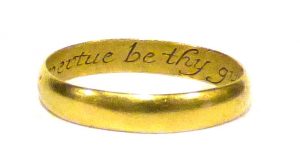 In the 1700s silver “poesy rings” engraved with flowery sayings are in vogue in Europe. Across the Atlantic Ocean, the Puritans give their betrotheds useful thimbles instead of rings, which are derided as frippery. Eventually, however, many thimbles get their tops sliced off and are worn as rings anyway. (Where there’s a will, there’s a way…to make jewelry…) 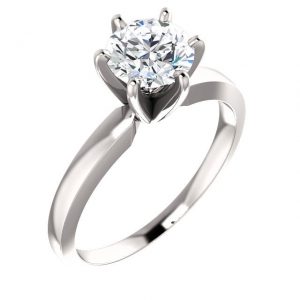 In 1886 Tiffany & Co. introduces the “Tiffany setting,” a six-prong ring designed to maximize a diamond’s brilliance by raising it up from the band. (The iconic solitaire engagement ring was born…)
The 1890s saw affordable wedding rings and diamond engagement rings appear in mail-order catalogs, such as Sears & Roebuck. (Just goes to show that people bought rings sight-unseen long before the internet…)

In the 1930’s, DeBeers introduced a marketing campaign with the slogan, “A Diamond Is Forever” in an attempt to stimulate diamond sales during the Great Depression. (Some concepts just make sense…)

Until this time, it wasn’t common for men to wear wedding bands. However, with men going overseas during World War II, the 1940’s brought men’s wedding bands into the mainstream. (Remember fellas, you have a loving wife taking care of the home front…)

Not until the 1980’s was the concept of two month’s salary introduced as a guideline for engagement ring purchase. (Again, thanks DeBeers…)

Here in 2019 we see as many variations on engagement and wedding rings, as we see differences in couples: from the traditional plain, gold band and the solitaire diamond, to custom designed rings with birth stones and engraving with special meanings. Here at Roper’s we don’t push the idea of two month’s salary, instead, we look for a good match for your taste as well as your budget.

We want you to treasure your rings and enjoy your shopping experience.